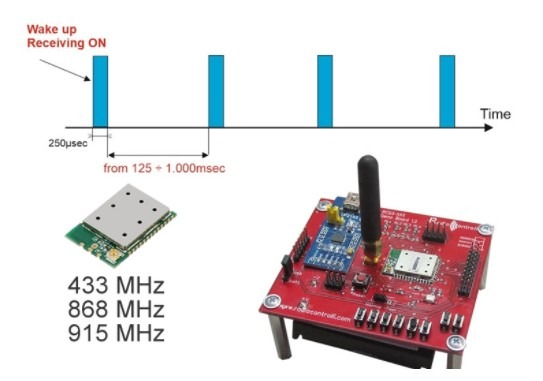 The wireless sensor networks (WSN) requires very low power wireless communication capabilities. The radio transceiver consumes energy whenever it is active, it is much more efficient leaving the receiver off,  and reactivating it asynchronously only when needed. A dedicated wake up receiver can continuously monitor the channel, listen to the RF signal from other nodes and activate the main receiver upon detection.

It’s a transceiver module that uses «wake up receiver tecnique» to be used in very low consumption applications.The WakeUp-Receiver continuously monitors the wireless channel (without the use of a microcontroller) and recognizes if there are any radio signals addressed to him, in this case it returns the data received on the serial interface.  The device wakes up every 1000ms (this time is programmable) for a time of 250µsec.
In this conditions the average of the consumption is 10µA with a Sensibility of -110dBm.

The device RC-WuTRx-XXX is based on the CC1310 device from Texas Instruments, and is available
at three frequencies : 433MHz - 868MHz and 915MHz.

The device can be work in two modality :

You can use this device in three possible ways :

- As a simple Receiver Module with a low consumption of 10µA without any bidirectionality.

- Use this module with an external microcontroller and when is necessary to make a transmission or request of information to the remote device will enable the transmission (TX enable).